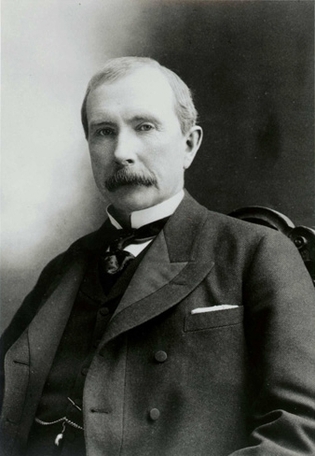 “If you want to succeed you should strike out on new paths, rather that travel the worn paths of accepted success”  (The Ultimate Oil Man: John D. Rockefeller).  John is an outstanding entrepreneur who had helped organize The Standard Oil Company with the help of his brother.  The Standard Oil Company had become one large monopoly and controlled nearly all the firms in Cleveland.  Before becoming a founder of The Standard Oil Company, John was very big on charity.  As a young boy, his mother was very religious and taught John and his brothers to work, save money, and donate it to charity.  Blake and John had the same idea, where they wanted to give back to those who weren't as fortunate as they are.  “I believe in the dignity of labor, whether with head or hand; that the world owes no man a living but that it owes every man an opportunity to make a living” (The Ultimate Oil Man: John D. Rockefeller).  Just like Blake Mycoskie, John started off with no experience while he built up The Standard Oil Company.  After John graduated college, he took many business courses and excelled tremendously, with them being to easy he left to achieve something bigger.  He was a man who took risks in life hoping for the best outcome.  John would be a perfect candidate to be on the Director for TOMS Company because he is a dedicated man who strives to succeed.  With John’s new ideas and heart, he will make a huge difference in TOMS Company.
By: Kristen Wong

While John D. Rockefeller rose to fame in the oil industry, he was very well known for being a philanthropist.  “Before his death in 1937, Rockefeller gave away nearly half of his fortune. Churches, medical foundations, universities, and centers for the arts received hefty sums of oil money” (36b. The New Tycoons: John D. Rockefeller).  As shown in the quote above, he donated tons of his money to countless causes.  But, not only did he donate the money, he also was working to make the world a better place.  He donated his money to causes that he believed in and knew were important in not only improving the economic status of the world but also the social status.  That’s one of the reasons that he would be perfect for the TOMS Board of Directors.  It’s not just the money that is important in a business, you need someone that has the capital, and believes in the project and what the project is doing socially for the world.  He would definitely feel strongly about Blake Mycoskie’s TOMS shoe business.  TOMS is supposed to stand for working towards a better TOMORROW and that’s also what Rockefeller was working towards.  A famous quote by Rockefeller puts his own philosophy into words.  “If your only goal is to become rich, you will never achieve it” (Rockefeller).  He knew that it wasn't just about making money; it was about making a difference.  And that’s what TOMS also stands for, making Rockefeller perfect on the TOMS Board of Directors.
By: Cassidy Adams