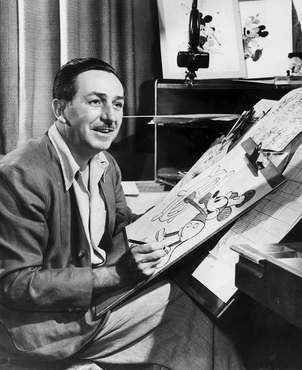 The name Walt Disney invokes a sense of creativity and imagination that has become synonymous with his multi-media empire. He was a true visionary who was ahead of his time. Disney not only created the world’s most enduring and famous anthropomorphous mouse, but also devised theme parks that set the standard for all modern amusement parks today. Although some doubted the wisdom of opening such ambitious projects, Disney persevered and opened Disneyland and Disneyworld, both of which were based on his dreams for the future. An example would be the Disneyworld resort of Epcot, which is “a futuristic, planned city that would showcase American industry and research, schools and culture”(Kao). All of this was thought of in the 1950’s, an era of economic prosperity and optimism. This is in stark contrast to the conditions of the United States today. Our economic downturns, slow growth, and stagnant educational institutions have left us far from being the top in the world. This is when the need for a visionary like Walt Disney as a leader is essential for starting something that matters. He had brilliantly “made the connection between progress and education, and his passion for learning was also well known… Walt Disney cared deeply about the quality of our shared future and how it would come from understanding the secret sauce of innovation”(Kao). A way to help all of us out of our current economic woes is to start thinking bolder, smarter, and more creatively, but also with optimism and pragmatism. Walt Disney would be the right person to lead TOMS shoes in that direction.
By: Andy Bui

“Walt Disney had humble beginnings; he was not born a success, instead he made his own success" (Walt Disney Short Biography). Disney devoted his life into drawing almost every second of the free time he had. Either drawing on spare time or even as an artist, Disney enjoyed every moment of it;  rather than going to a job that doesn’t make you happy, he turned his love for his passion into his career. Before pursuing his dream, he worked several odd jobs and also volunteered as an ambulance driver for the army in WWI. Through these moments of his life made him decide to pursue his art as his career. Disney never took his art and work for granted, his persistent working ethics never made him procrastinate during the time spent in his studio. “He always took the lead when it came to doing what he loves and he would never put his passion on the back burner” (Walt Disney Short Biography). Walt Disney was passionate about his work and thrived for perfection, nothing got in the way of his working ethics because took his work seriously without ever procrastinating and even taking other jobs to fund his passion. Never has Disney produced work for himself, He wanted to publicize it by finding ways to share his work with others. Walt Disney’s works (films) taught us a lot of things, such as the value of love for friends and family, hope for the good and his most important lesson: “good will always triumph over evil" (Walt Disney Short Biography).
By: Danny Do